short history of the Nits (in Dutch)

the first Nits gig ever, in front of the Akhnaton club, Nieuwezijds Kolk, Amsterdam, on Queensday (April 30)

above: one setlist for the band and one for soundman Paul for shows at Body’s Music Inn & student club Lanx. Written on the business paper of the Concrete Brothers (Henks’s father and uncles), contractors.

above : single : umbrella / some other night

Together with the musically related new wave band The Tapes (also from Amsterdam, who heavily opposed to be called 'the Dutch Talking Heads') The Nits start the year with the Elfstedentocht (tour of 11 cities, after the famous skating marathon.

In spring, they release the single Umbrella, produced by Robert Jan Stips, (known as musician from Supersister, Golden Earring and Sweet d’Buster and as producer for Gruppo Sportivo’s succesfull lp’s ).

The jumpy, somewhat intellectual Nits sound finds a form in the second album TENT (december ’79). This lp was engineered by Aad Link, who had been soundman for Supersister and the Golden Earring. Round 1979, he also became the band’s manager, which he still is nowadays.

With Tutti Ragazzi, the lp holds a hitsingle and gets more positive reviews in other West European countries. The leading British music magazine NME chooses the record as that year’s second best European album. 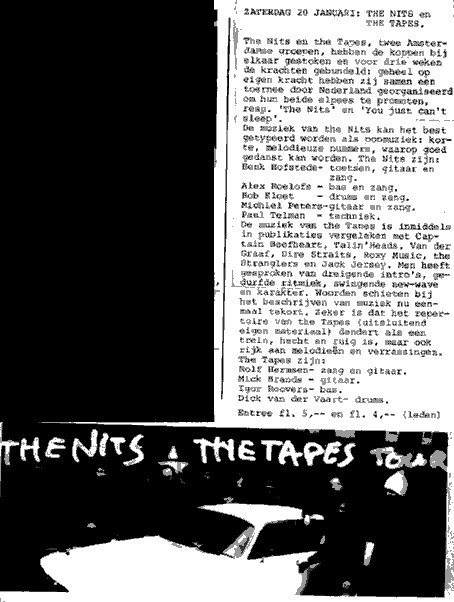 postcard from the days of 'Umbrella'

Nits stage outfit was styled in red and white

We're still using the red roadboxes for the backline

tracksheet for Ping Pong, from the lp Tent